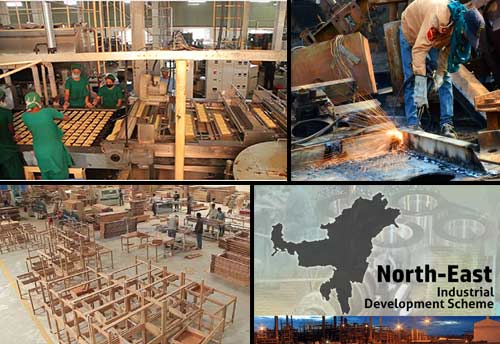 New Delhi, November 26 (KNN) During the 9th meeting held by the Empowered Committee of North East Industrial Development Scheme (NEIDS) 2017 under the chairmanship of the Secretary of the Department for the Promotion of Industry and Internal Trade (DPIIT), the registration of 105 new units industrial plants in the Northeast has been granted. .
To date, a total of 391 new industrial units with a proposed total investment of INR 2,631.19 crore have been registered under NEIDS, 2017. Thus, all registration applications recommended by the governments of the states concerned up to October 31, 2021 have been reviewed by the competent authorities. committee, the official statement said.
The total incentives envisaged by these 391 industrial units amount to INR 1,740.06 crore with an expected job creation of 15,987.

In order to promote industrialization in the northeastern states and boost employment and income generation, the government notified NEIDS 2017 on 12.04.2018. The program was formulated on the basis of suggestions received from state governments, industry associations and other stakeholders. The scheme covers both the manufacturing sector and the service sector.

This could be achieved through key initiatives taken including the development of an online application portal that allows the submission of online application and complaint forms in addition to the online processing of cases, with each step reported to the applicant. .

The government of India has also delegated application processing and approval powers to state governments to expedite the payment of incentives to industrial units.

All stakeholders are periodically engaged through symposia and workshops and one of these mega-engagements took place on November 30, 2019 on the theme “Accelerate investment and industrial development in the Northeast region” by DPIIT with members of the Invest India and Ease of Division Doing Business (EoDB) team, heads of departments in industries Departments of 8 state governments, national bodies like APEDA and NER representatives of industry associations such as CII, FINER, Laghu Udyog Bharati, ASSOCHAM and FICCI etc. in addition to the manufacturing and service sector units located in the North East region and other stakeholders. Practical treatment training on the NEIDS portal was also provided.